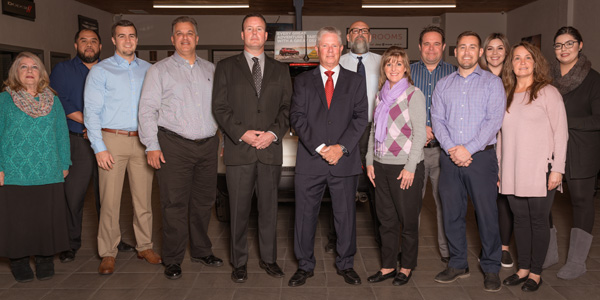 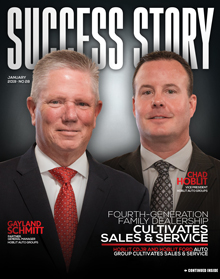 Usually, when Americans think of California, they think of warm, sandy beaches and the bright lights of Hollywood. Possibly even the beautiful orange groves and wineries in Napa Valley. However, what most individuals fail to realize is that California is also rich and diverse in farmland that consists of rice fields, dairy farms and almond and walnut orchards.

Agricultural communities don’t usually lend themselves to successful automotive dealerships due to the low drive-by traffic, but one fourth-generation family dealership has plowed through the competition of massive auto malls and made a distinct name for itself in the Golden State.

In 1949, Chad Hoblit’s great-grandfather started the family’s Ford dealership in the small Northern California town of Colusa, where the current population has held at less than 6,000 people. In 1999, the generations of Hoblit’s expanded their company by purchasing the Chrysler, Dodge, Jeep and Ram (CDJR) dealership in Woodland, CA. Although this location is only 20 miles from downtown Sacramento, they are still very much part of the rural community.

Today, Chad Hoblit runs the CDJR Woodland dealership, while his brother and semi-retired father run the Colusa location. In 2011, the family hired Gayland Schmitt as a partner and general manager. Since then, the Chrysler store has grown to 104 employees and the Ford store to 45 employees.

A Focus on Farmland

The rural landscape presents challenges and opportunities to both dealerships. While Woodland is a much larger city than Colusa, it is by no means a huge metropolis. The town currently boasts a total population of 60,000, and, according to Chad, they house a few restaurants as well as some mom-and-pop shops.

“The Sacramento River basically separates the whole Sacramento region from the rural, farming region,” Chad said. “Once you go over the river, and past the Sacramento Airport, it turns into nothing but farmland.”

Gayland concurred. “This isn’t a destination store. No one comes out here to search for cars. They come out here because they are drawn in by our advertising and enticing website features.”

To surmount the locations’ disadvantages, the company has always made catering to the agricultural clientele an integral part of their family business and motto.

“By catering to the local community and farmers in the heart of Northern California farmland, we have really focused on selling and maintaining trucks,” Chad continued. “For me, growing up in such a small town and with all these farmers and friends, I’ve noticed that either you are in ag industry or somehow associated with it. Since they all drive trucks, and need them for work, our focal point has always been on big truck sales.”

By adhering to their target market and focusing their marketing efforts and business philosophies on serving these customers, the results certainly paid off.  Some customers come as far as 200 miles away just to purchase a vehicle from their stores.

“When people come out here from Sacramento or the Bay Area, they’re used to the auto malls and brand-new facilities,” Chad said. “When they come here, they’re very pleased. They really appreciate the old nostalgic throwback of a small-town and a family-grown atmosphere. It’s like going back to the ’50s or ’60s really.”

While the small-town atmosphere is welcoming, the reason customers know about the stores’ services is due to the company’s detailed attention to their marketing strategy and website presentation.

“We view our website as our virtual showroom,” Chad said. “It’s where people can browse, shop and conduct their whole transaction online without having to step foot in the dealership.” 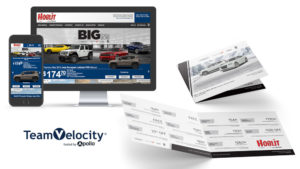 Marketing Strategy Success
Gayland credits their employees, their marketing technology and the processes that they’ve put in place for the company’s success. “I’ve been in the car business for over 25 years now and have managed to bring in a lot of good employees and managers,” Gayland said, later adding, “We’re hopefully going to sell 3,000 new cars this year.”

Marketing is a critical component to Hoblit’s success. Since pairing with Team Velocity, their YTD total sales have increased by over 16 percent and monthly service ROs are now up 55 percent.

“I just believed in their marketing,” Gayland said of Team Velocity. “What they’re doing for us is in our perfect market, which is probably like a 30-mile radius, is tremendous. They’ve increased our sales all while driving sales to our service department. They’ve helped us build a solid core for our business. Our nearest competitor used to be number one in the Sacramento region, and we’re beating them now! We’re the number one Ram truck dealer in California, and I’m hoping that this year we’ll become number two in the nation.”

Team Work
Reaching not only more people, but the right (buying) people is critical — and as part of the marketing with Team Velocity, Hoblit has redeveloped their branding message by highlighting their staff and hassle-free transactions.

“We have a great team, and we approach it a little differently,” Gayland said. “We really pride ourselves on being family owned. We’re not an auto mall. We’re in a small town. We get people from LA, Arizona and all over the place.”

“We have an outstanding and experienced staff here,” Chad said, “We don’t like to waste our customer’s time, and our targeted process is really where we try to keep it simple.

“We’ve been marketing toward the consumer who wants to go online, find the vehicles they’re looking for, have the vast selection and if we don’t have it, we’ll get it at no extra charge,” Chad continued. “With this process we’re able to get customers pre-approved, work the trade-in numbers and pretty much work the whole deal before they come in. Our goal is and has always been to create a frictionless and seamless sales process. They’re in and out, hopefully within an hour, maybe two. The goal is an hour, but when we’re backed up, it’s hard. We don’t spend a lot of time negotiating the deal, but unfortunately, even with only four finance managers, it takes a little while to get people out of here sometimes, but that is the idea.”

Chad and Gayland both agree that the company’s emphasis of keeping family-friendly environment really helps fight off the nearby auto mall competition.

“People hate the car-buying process, so we try to transform that into a more pleasurable and enjoyable experience.”

Service Solutions
With customers traveling long distances to purchase vehicles, there’s often a struggle to retain them for service. Hoblit relies on the work of Team Velocity to keep the service department business growing.

“We’re retaining a lot of our customers through our service department,” Gayland said. “The ones who are 200 miles away are definitely a little harder to retain, but with Team Velocity, they’ve helped us attract more customers in our appropriate market. Thanks to them our service depart has grown immensely.”

The company has added an offsite facility with 14 lifts in it for truck and large commercial vehicle service. In addition to the agricultural vehicles, Chad said there are many businesses in Sacramento and the East Bay area that don’t have a convenient place to have their vehicles serviced.

“We’ve been able to double — and almost triple — our capacity,” Chad said.

“Now, I’m looking for a third facility to do even more service,” Gayland said.

The company also has a great success rate with Team Velocity’s vehicle upgrade program. Their program successfully matches customers with their next top upgrade model and provides them with relevant, payment-based offers.

“I have one full-time gal who actually makes calls every day, calling customers about the upgrade program,” Gayland said. “We do so well with it, I’m actually interviewing a couple more people to help get more deals out of it.”

The company’s success has led to the purchase of more lots, including a Ram Truck Center, and they’re looking to expand even further — all while keeping the family, small-town atmosphere intact.

Like the surrounding farmland, the Hoblit dealerships are poised for years of continued growth in the California sun.

This article is dedicated to the memory of Wayne Hoblit, founder, owner and loving parent.

Click here to view more solutions from other Success Stories.