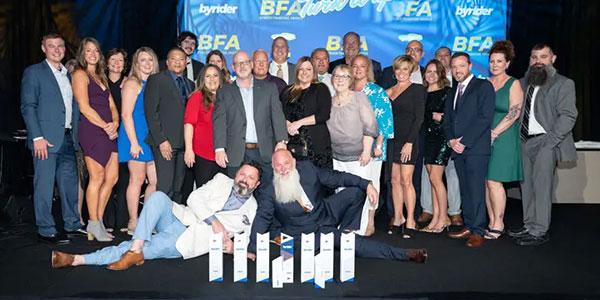 Byrider, one of America’s largest buy-here-pay-here used car dealerships and franchise systems, presented annual awards to its franchise body at the company’s annual convention in Aventura, Floriday, Nov. 10-12. The awards ceremony was held on Sat., Nov. 12.

Craig Peters, chief executive officer at Byrider, said, “We’re proud to recognize our franchisees and their teams each year at our annual convention. Our franchisees are at the heart of Byrider’s success. Their commitment to helping their customers move forward, as well as expertly operating their stores, is truly commendable.”

“I am excited to recognize the owners and operators who have been key drivers of the Byrider franchise business in 2022. These franchisees and operators demonstrated their ability to set high customer service standards and grow the business,” added Chris Hadley, vice president of franchising.

Franchise of the Year

The franchise of the year award recognizes the best overall performance by a franchise group based on internal store rankings and a measure of how the business has contributed to the Byrider franchise community.

The president’s awards recognize dealership locations included in the top 10% of stores as defined by Byrider’s store ranking system. Winners, in order of performance ranking:

The most improved award was granted to stores that demonstrated the most improvement from 2021 to 2022 based on store rankings (earnings, customer advancement, service comebacks, reputation management, portfolio performance, etc.), organized by franchise size.

Also honored with a Commitment to Excellence Award was Greg Barrett, who co-owns stores in Ohio and North Carolina. The award recognizes Barrett’s and his team’s dedication and high-performing stores’ contributions to the larger Byrider network.