The Importance of Testing Batteries With a Scope - AutoSuccessOnline 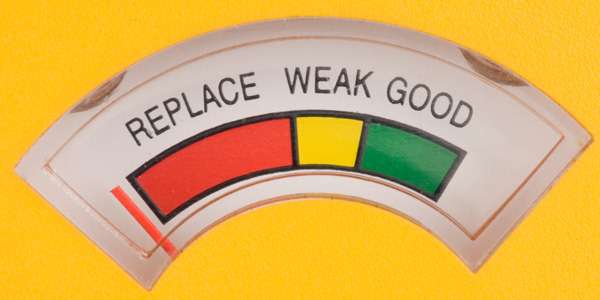 Have you ever had a vehicle that sets inexplicable intermittent communication codes — the ones that start with “U are going to spend a bunch of time trying to duplicate this one?” Have you considered that the root cause could be the battery? A while back, my friend Jeff Bly and I were talking about how technicians are taught to test batteries. We determined that these techniques were fine for pre-computer-controlled cars. So, that means if you learned the old load ‘em to 9.6 volts way, or you are using an electronic testing system, you are not getting the full and necessary picture.

Our test subject is a 2014 Fiesta ST that would turn the wrench light on right after startup. You can see what was going on in the screen captures from the IDS. This car set a U3003, which gave us a great tip. You will also see the freeze-frame data shows VPWR at 8.2 volts during the capture. The battery passed the test on both my trusty, old VAT and my capacitance battery tester with flying colors. If this was all you used, you might be scratching your head and sending the car off with a fully charged battery, only to have it pop the wrench light right back on.

We are looking for two things: How far does the battery voltage drop during crank, and how long does it stay down there?

Jeff and I have both played with this test on several vehicles and found that something around 135ms total time below 10 volts is about the practical limit before modules go down, and fewer than 7 volts (8.2 volts on the Fiesta) is the low threshold. I have seen a couple of problem batteries go down below 4 volts and cause no starts or really long cranks. Often the U-codes set are ABS, perhaps because it has more load on start-up than straight-up logic modules do.

In the accompanying diagrams, you will see a capture of a 2016 Subaru Outback. This is a low-mileage car that I always thought cranked slow for a Subie. We hooked up a scope and tested it. The results are in the caption, but I would replace this battery even if it were less than two years old. The time under 10 volts is right on the edge and the lowest voltage during crank is also right there. Be sure to try a healthy battery and watch how quickly they rise (under 50ms in most cases) back above 10 volts. I don’t have to mention that you are going to get false positives if there is a starter or mechanical engine problem.

Old battery testing techniques are not exposing problem batteries before they strand your customer. They also can be the source of fruitless diagnostic work, so be sure when you have these codes that U test the battery with your scope.

Photo 1: The 2014 Fiesta ST turned the wrench light on and gave us some clear clues that a battery problem existed. 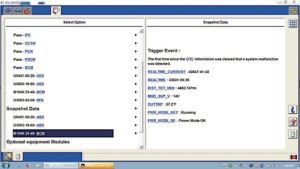 Photo 2: The freeze-frame data showed that the battery voltage set at the U code was clearly low. The battery passed standard battery tests. A replacement solved the problem. 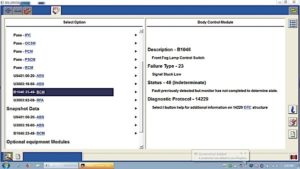 Photo 3: Late models start pretty fast, but 500 ms per division on a 20V scale will work fine. You will notice that the static voltage was also low at 12.14 — this was another indicator. This had two back-to-back starts while we set the trigger and dropped to this point. See that we had a total rise time of 143ms, which is kind of long and we had a lower threshold of 6.82. Even fully charged, this battery tanked to 7.1 volts on crank. Also note that the PCM-controlled alternator at the end of the crank was coming on with a soft rise to 14.15, rather than a straight vertical line. 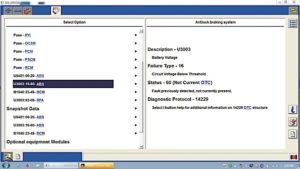