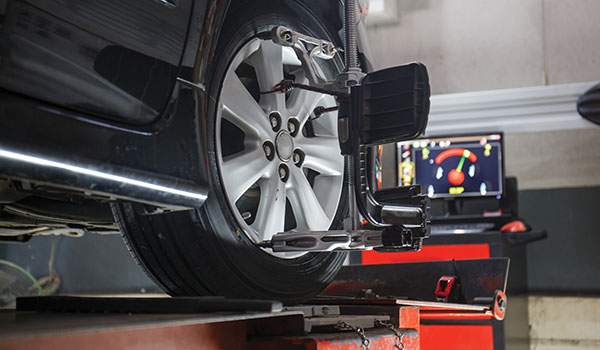 Suspensions have gone softer with larger-diameter bushings, compared to 20 years ago. During this time, both ride quality and handling have gotten better.

Most modern bushings augment the geometry of the suspension. As the vehicle loads the suspension, movement in the bushings can change the toe, camber and caster so that the vehicle is more stable under braking, cornering and acceleration.

Even if you can get the camber, caster and toe dialed in on the alignment rack, a weak bushing may cause suspension geometry to change once the vehicle is in motion. These dynamic changes are the reason why bushing inspection is critical.

Modern suspension bushings act like a progressive spring. As the bushing is loaded in different directions, the first few millimeters of movement might occur with very little effort. As the load increases, the bushing will become stiffer. In addition, a control arm bushing may react differently to loads caused by braking and those caused by side loads.

The structure of the bushing can be complex in order to possess these progressive qualities. You may notice different structures, voids and materials in a bushing. Some of these voids may pass all the way through the bushing.

Some bushings may have chambers filled with oil. These are commonly called hydraulic bushings. As loads are put on, the suspension fluid will pass between the chambers. Since a fluid is not compressible like the bushing’s soft components, movement of the suspension can be controlled in a more predictable manner. The oil and chambers also help to isolate the vibration and noise from the tires. When hydraulic bushings fail, they will leak oil.

The alignment of the bushing is critical on these advanced bushings. A difference of as little as 7 degrees in how the bushing is installed can change how it operates, which can eventually lead to the premature failure.

Many bushings need to be tightened to the final torque specification with the suspension loaded. Failing to do this may result in damage to the new bushing. Weak springs and lower-than-specified ride height can also cause the bushing to fail.

The most common symptom of bushing wear is tire wear. Worn bushings often cause a “toe in” condition as the vehicle travels down the road. In rear independent suspensions, worn lateral links can cause extreme cases of toe and negative camber. This leads to extreme inner-edge tire wear that might not be obvious. The customer may think that the tires are fine, until one is punctured, or they encounter slick road conditions.

It is possible for a vehicle to have a worn bushing with alignment angles that are still within specifications. However, as the bushings fight against the forces of rolling resistance, braking and acceleration, weak bushings can cause the camber, caster and toe angles to change due to the size and placement of the bushings. This is why a visual inspection of the bushings is critical. If any part of the bushing has separated or has been torn, it is grounds for replacement.

Ozone and extreme temperatures tend to destroy rubber bushings. Many bushings are subjected to high temperatures from the brakes. These temperatures can exceed engine and exhaust temperatures. Environmental damage of this kind will cause hardening of the materials and eventual cracking. While some cracking can be normal, the strength of the bushings will eventually be compromised as the cracks grow. Some OEM service information will list how long and how deep a crack can be before replacement is required.

Have you ever noticed a vehicle with one wheel that has a buildup of brake dust? It could be the result of the thrust angle being changed by a worn bushing. This can occur on all vehicles with stability control, regardless of the type of suspension design.

The thrust angle is an imaginary line drawn perpendicular to the rear axle’s centerline. This measurement compares the direction that the rear axle is aimed with the centerline of the vehicle. It also confirms if the rear axle is parallel to its front axle, and that the wheelbase on both sides is the same.

To the customer, an “off” thrust angle will mean an off-center steering wheel. To a stability control system, the increased steering angle and changes in yaw sensor readings could be seen as understeer. To correct the imaginary push, the ESC system will pulse the brakes for one wheel. The customer may notice a momentary pull, while you may notice a buildup of brake dust.