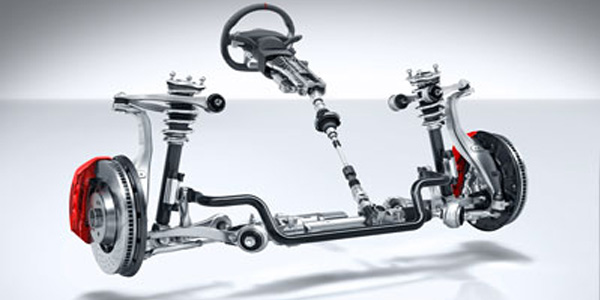 You may remember an ad campaign attempting to guilt consumers into replacing their tires. The ads featured babies next to a tire to pull at consumers’ emotional heartstrings. Adding the little kiddos into the mix was a way the company could get consumers to understand the importance of their product. The tire is part of the suspension system in that it is the main connection drivers have with the road, but just as important are the shocks/struts, springs, control arms and steering parts.

The suspension is what allows drivers to maintain control of the vehicle in varying conditions and over changing, and sometimes rough, terrain such as potholes, railroad tracks and speed bumps, to name a few. Drivers face these obstacles out on the road every day. It doesn’t just take a collision with another vehicle to damage or bend a suspension part.

If a vehicle has been in a collision, diagnosing a bent part may require only a visual inspection to see that a component is broken or in need of repair. But what about when it’s not so obvious? A visual inspection is not always enough. A bent, broken or misaligned steering or suspension can cause a vehicle to handle poorly, as well as create excessive tire wear and poor fuel economy.

An alignment rack is one of the best tools for checking suspension and steering damage. But, sometimes, you need to find out what is bent or broken before it goes up on the rack. And, on many late-model vehicles with an independent rear suspension, the rear wheels may need to be aligned as well. Misaligned or broken rear suspension components can cause the same type of problems as the front.

If the control arms are merely worn and not bent, then the repair procedure follows a more straightforward path. Worn control arms, for example, will exhibit some of the signs of a bent control arm in that it may vibrate from a tire “dragging” down the road instead of rolling true. The vehicle may wander from the steering angles being out of alignment, causing excessive toe-in or toe-out. However, initial checks of the suspension that is bent may not reveal any play in the bushings, ball joints or tie-rods, leading to the conclusion that the suspension is fine.

Camber can affect directional stability. A vehicle will lean toward the side with the most positive camber. It is best to compare camber readings on both sides. A difference of more than half a degree can cause the car to pull to one side.

If camber is off on one side due to the driver hitting a pothole or curb, pay attention to the suspension components, such as the control arm and strut, as one of them may be bent. It would be a lot more difficult to distort a strut tower from a curb or pothole, but, if it did, the effects could be the same. A shift in the crossmember position, on the other hand, can affect the camber on both sides.

Different camber readings side-to-side with a bounce and rebound camber check can usually reveal a bent strut. If the measurements are the same, then it is a good idea to check the steering axis inclination (SAI) angle side-to-side.

Watch the Angles
The caster angle is the difference between the steering axis and the vertical axis, measured longitudinally. Caster is similar to the fork rake angle of a bicycle or a motorcycle. Some refer to the caster angle as kingpin angle (KPA). The bigger the angle, the more stable the car will be at high speeds, but it will have heavy steering feel when the angle increases as the wheel is turned.

The Steering Axis Inclination (SAI) angle is measured in degrees and runs from the lower ball joint through the upper ball joint (or through the center of the strut mount on FWD vehicles). The camber angle is not included with SAI because it is a non-adjustable angle. When SAI is out of spec, there is a high probability that something is bent in the suspension or steering. The biggest difference between the SAI and the included angle is that the camber angle is added to the SAI angle to obtain the included angle.

While an alignment rack is not the most efficient tool to use to check for a bent or broken suspension, the numbers and specs for a specific vehicle don’t lie. If things aren’t lining up; if, for example, the specs say plus or minus 1/2 degree of camber, that doesn’t mean to set one a 1/2 degree positive and the other a 1/2 degree negative. The vehicle would have a pull toward the side to which it was leaning.

If your customer brings his vehicle in for an alignment only because it is pulling to one side, there may be other underlying issues you need to investigate. There’s a higher probability that something is bent or broken if the vehicle all of a sudden develops an alignment issue. If the car has been operating for a while with the problem, the tires may tell the tale. Look for signs of cupping or uneven wear.

Other causes of uneven or unusual tire wear may include things such as worn struts or shocks, which can cause tires to bounce and create a “dish” or “cupped” tread. Wornout wheel bearings can cause the tire to lean since the bearings are what keep the wheel assembly in position on the vehicle’s spindle.

Worn or damaged tie rod ends, ball joints, upper and lower control arm bushings, and other steering components can cause steering-related issues. A worn or bent steering rack can also create alignment headaches. But, most of these are due to wear and tear, not bent or broken components.