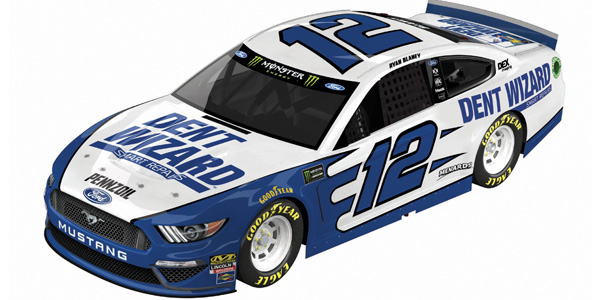 Automotive Reconditioning Brand to be Featured on the No. 12 Ford Mustang Driven by Ryan Blaney

Recently, Team Penske announced a new multi-year partnership with Dent Wizard, a provider of automotive reconditioning services and vehicle protection products. The Dent Wizard brand will debut as the primary sponsor on the No. 12 Ford Mustang driven by Ryan Blaney for two races in the Monster Energy NASCAR Cup Series (MENCS), including the August 17 race at Bristol Motor Speedway and the October 13 event at Talladega Superspeedway.

“Dent Wizard has established itself as an industry leader and we welcome them as our newest partner at Team Penske,” said Roger Penske. “We have enjoyed new opportunities with some new partners since our NASCAR Cup Series program expanded to three full-time entries last season with Ryan (Blaney) joining Brad (Keselowski) and Joey (Logano). We are excited to work with Dent Wizard to help build the company’s brand and showcase its services.”

“We are excited about the Team Penske partnership,” said Mike Black, Dent Wizard president and CEO. “At Dent Wizard, our team of 3,000+ associates pride ourselves on exemplifying our core values of integrity, innovation, customer devotion and excellence. Having spent the last 35 years in the reconditioning industry, we have learned to value great partnerships that create a win-win for both parties. Dent Wizard is happy to continue building our business and brand within the automotive space.”

At just 25 years old, Blaney has emerged as one of NASCAR’s brightest young stars. In 2018, he captured his second career Cup Series victory at the ROVAL at Charlotte Motor Speedway, while he won three poles and finished10th in the NASCAR Cup Series standings. This season, Blaney won the pole at ISM Raceway in March and he is currently ranked 10th in the standings.

“It’s great to build a new relationship with Dent Wizard and have them as part of the No. 12 Mustang team,” said Blaney. “I hope to bring their brand a ton of new exposure at two great tracks later this year and into the future.”

Dealers attending NADA 2023 that have not previously shipped cars or trucks with Autosled previously are eligible for a portion of the $100,000 cash back giveaway. Qualifying dealers will each receive a minimum of $500 cash back, with no upper limit on the amount of money that a dealer can receive. Dealers are encouraged to ship as many vehicles as possible during the promotional period. While the cash back is on a first come, first serve basis, if the limit is reached prior to the end of the first quarter, Autosled will extend the limit to accommodate any additional vehicle moves for qualifying dealers during the promotional period.

Many owners of TSI-equipped VWs and Audis have experienced drivability concerns and a P2015 code.

The Maverick tire changer keeps the technician completely in charge with smooth and fully variable operation.

With Autometrics predictive data added to the mix, a dealership can better align their advertising based on predictions of what future buyers are looking to purchase.