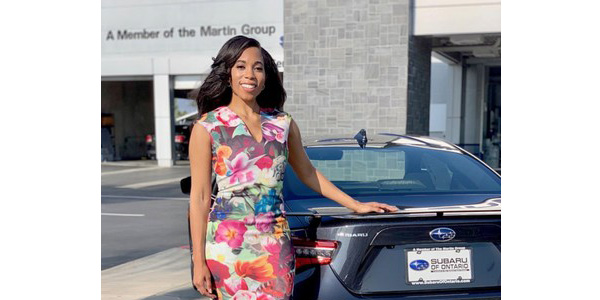 Detroit, MI – Ally Financial and the National Association of Minority Automobile Dealers (NAMAD) have named Amber L. Martin of the Martin Management Group in Bowling Green, Ky. the second-ever recipient of the Ally Sees Her Award in recognition of her dedication to giving back to her community and her leadership in promoting the next generation of minority dealers. Martin leads business and community partnerships for the national automotive and motorsports retail organization founded by her father, the late Cornelius A. Martin.

Martin will receive the award, inspired by the Association of National Advertisers #SeeHer campaign to elevate women in media and marketing, during NAMAD’s 2019 Annual Membership Meeting in Miami on Thursday, July 11. Ally created the award last year to recognize promising, young women leaders in the auto retail industry.

“Not only is this an incredible honor for me personally, but it gives me the chance to help others, which is a privilege that is dear to me,” said Martin. “Having worked in media and entertainment, I understand just how important it is for all women to have advocates and a team to help advance them in their careers. Our voices as women leaders are imperative. Preserving and advancing our presence in the dealership and in the boardroom is crucial for the future of our industry.”

To recognize Martin’s work, Ally will make a $10,000 donation to two organizations she selected: the Western Kentucky UniversityFoundation and the Equal Justice Initiative.

The gift to the WKU Foundation will go to the Martin Minority Teacher Scholarship for the recruitment of minorities majoring in education and the Gail Martin Lecture and Faculty Development Series, which supports faculty development and bringing guest speakers to campus. The donation to the Equal Justice Initiative (EJI), an Alabama nonprofit organization that confronts racial injustice and advocates for equality, will support educational programming about the impact of slavery in the United States.

“I am inspired by the ambition of social activists like Mari Copeny, a young leader who won nationwide recognition for her work to draw attention to the water crisis in Flint, Michigan,” said Martin. It’s crucial for society and the media to promote and celebrate humanitarian acts such as Mari’s. The next generation needs to see this type of work being valued. I hope my gifts spotlight Mari’s fight for clean water in Flint and help EJI’s Racial Justice Project in its effort to educate the nation on the historical injustices of slavery in our country and their impact on contemporary issues.”

Martin began her career in her family’s dealership, learning business principles and customer service from her father. After graduating from Miami University, Martin relocated to Los Angeles and began a second career in media and entertainment, while launching a fashion boutique. After completing the NADA Dealer Academy Program in 2010, Amber returned to the auto industry and rose to become Martin Management Group’s West Coast Manager of Operations before stepping into her current business development position.

Her senior role at a major auto dealership group has proven an effective outlet not only for her considerable business acumen, but also for her drive to contribute to the community. The Junior League, The Women’s Fund Miami Young Professionals and Junior Achievement of South Central Kentucky are just a few of the organizations she has had the opportunity to serve.

In 2018, Martin was appointed to serve a two-year term on NAMAD’s NextGen board as the Marketing and Outreach Support Committee Chair.

“Amber is an exceptional ambassador for our industry and is incredibly deserving of this recognition,” said Jacqueline Howard, Senior Director of Corporate Citizenship at Ally. “Her automotive success combined with her unwavering dedication to service make her a natural leader for the next generation of minority women in automotive retail, and we are proud to recognize her achievements.”

Howard added, “Ally challenges itself to ‘Be Better’ and for us that includes promoting diversity and women in leadership. Our industry is stronger when everyone – including women and people of color – see inspirational role models like Amber.”

Damon Lester, president of NAMAD, added “Amber’s background and experience in automotive, media, and entertainment make her a triple threat to our industry. Amber’s knowledge, network, and ambition are truly a testament to the success of the Martin Automotive Group. All of these qualities are necessary for a dealer in today’s environment to possess.”