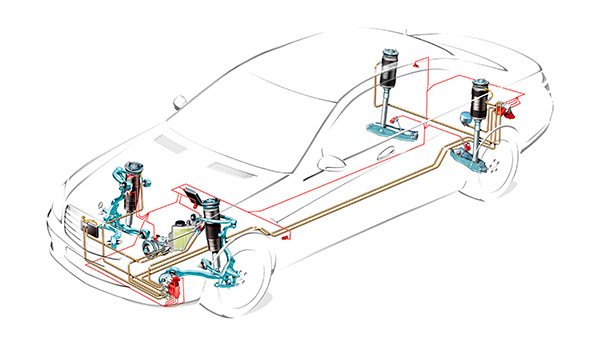 In the past, repairing any advanced ride control suspension would be pricey. Many consumers have been quoted $3,000 to $5,000 to fix a leak, code or mechanical issue at a dealership or specialist. The aftermarket and even some OE dealer lines are now offering new, remanufactured and reengineered advanced ride control struts and shocks at a fraction of the price that were not available a few years ago. Some ride control manufacturers also offer conversion kits to convert the vehicle over to conventional springs.

Shocks are filled mostly with oil, and this oil can have different weights. When the oil heats up, it can affect the rate of flow through the valving as it either thins out or becomes more viscous.

The reason why gas is added to some shock absorbers and struts is to reduce foaming or aeration of the oil in the shock that is caused by cavitation as the oil passes through the valving. Over time, shocks can lose this charge of gas. If all of the gas escapes, the shocks can overheat and fade.

Jaguar, Mercedes-Benz, BMW and many other manufacturers have air ride systems at all four corners on some of their SUVs and cars.

All four-corner systems are using air from the reservoir, even if the car is parked. This is because as the vehicle cools, the air volume and pressure in the bladders and reservoir will decrease. The system will trim the ride height to make sure the vehicle is not sitting on the ground when the driver returns to the vehicle in the morning. Some systems will also keep a level ride height if the vehicle is parked on an uneven surface or is unlocked and a load is placed in the trunk. But most systems will never turn on the compressor to make a key-off correction.

Most systems have fail-safe modes that preserve the system until it can be serviced. This means that the control module will not allow the compressor to melt down if there is a leak. Also, most units will maintain minimum pressure or height in order to prevent a bladder from fully compressing and the suspension from bottoming out.

With more and more air-ride-equipped vehicles accumulating miles, you can expect to see a steady stream of these air-ride systems in your bays. You also have more options than ever before when it comes to replacement parts and conversion kits.

Rear air ride systems in Asian vehicles like the Nissan Armada and Toyota Sequoia level the vehicle and add extra load and towing capacity. The most troublesome item for these systems is the compressor that operates the air springs. In the case of the Nissan Armada, the air spring in the shock works together with a conventional coil spring to carry the load. If passive shock units are installed, the spring might need to be changed.

For the BMW 7 Series E65/E66 manufactured between 2001-’08, engineers went with an innovative rear air ride system. The Dynamic Drive system that uses active anti-roll bars to keep the vehicle level was standard on these models. Some of these vehicles have optional Electronic Dampener Control (EDC) that tunes the compression and rebound of the dampener to the movement of the wheels and body for the best possible ride.

Some Acura MDX models have active dampeners called EDC in the front and rear. Some of them on the road are more than a decade old and have racked up more than 100,000 miles. When the shocks and struts fail due to a loss of fluid, corrosion or damage, the owner could have a very expensive choice to make.

For the MDX models, the owner could replace the OEM unit, or they have the option to install passive units for a significantly lower price. These ride control units should be replaced in sets. Also, a bypass for the EDC module is required to keep system faults from flashing in the driver information center.

Mercedes-Benz introduced the hydraulic ABC (Active Body Control) system in 2000 on the S class coupes and sedans, and later on the SL. The system uses hydraulic cylinders to replace the springs and dampeners.

The main failure culprit is a lack of maintenance; the recommendation is to service the highly specific fluid every two years. There is a replaceable filter in the fluid reservoir. Be sure to carefully follow the flushing instructions. The smallest amount of dirt will ruin the system. If an ABC system drops slowly after being parked, there could be a small piece of dirt in one of the control valves. A fluid flush may help dislodge it.

The ABC system uses very high pressure, provided by a tandem power steering pump. System pressures run between 2,600 and 3,000 psi, so extreme care needs to be taken when working on it.

System leaks should be repaired right away. If fluid can get out of the system, dirt can also get in. And as I indicated before, the smallest amount of dirt can lead to expensive repairs.

Parts for the ABC suspension are available. These include struts, sensors and pumps. Conversion kits are also available for the ABC system.